Lion has now secured the largest land position on the under-explored Seram Island, East Indonesia containing the 1.5-2 TCF Lofin gas discovery. The discovery has transformed Lion’s focus at Seram with Lofin being one of the largest onshore gas discoveries in Indonesia since the early 1990’s.

Lion has 60% of the East Seram PSC (ES), which is highlighted in blue below. ES covers an area of 4,557 sqkm following a required relinquishment in 2021. 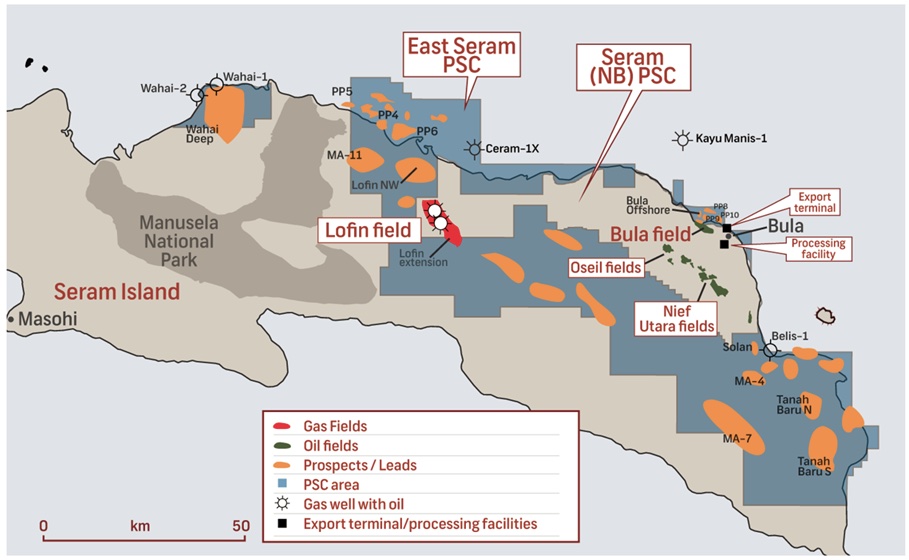 Seram is characterized by two distinct hydrocarbon plays: the shallow Plio-Pleistocene play which was the historical focus like with the Bula Field having already produced 20 mmbbls and still producing today, and the deeper, larger volume potential Jurassic fold-belt play (Oseil oil and Lofin gas).

The shallow Plio-Pleistocene play is mature onshore although in the offshore portion of the East Seram PSC material volume potential remains in close proximity to existing infrastructure.

In November 2020 Lion shot a 664 km 2D marine (offshore) survey focussed on the shallow play which resulted in many new highly attractive prospects including well developed carbonate build-ups, The survey also confirmed the offshore extension of the Bula field.

The Jurassic fold-belt play which has the Jurassic Manusela limestone as the key reservoir objective is being targeted with a planned 200km 2D seismic survey in 2022.

Some six wells have penetrated the Manusela Formation and all have found hydrocarbons including:

The faults are the connection between source and reservoir and are also manifested by surface oil and gas seeps.

There are numerous Lofin and Oseil analogues along the identified structural trends in the East Seram PSC.